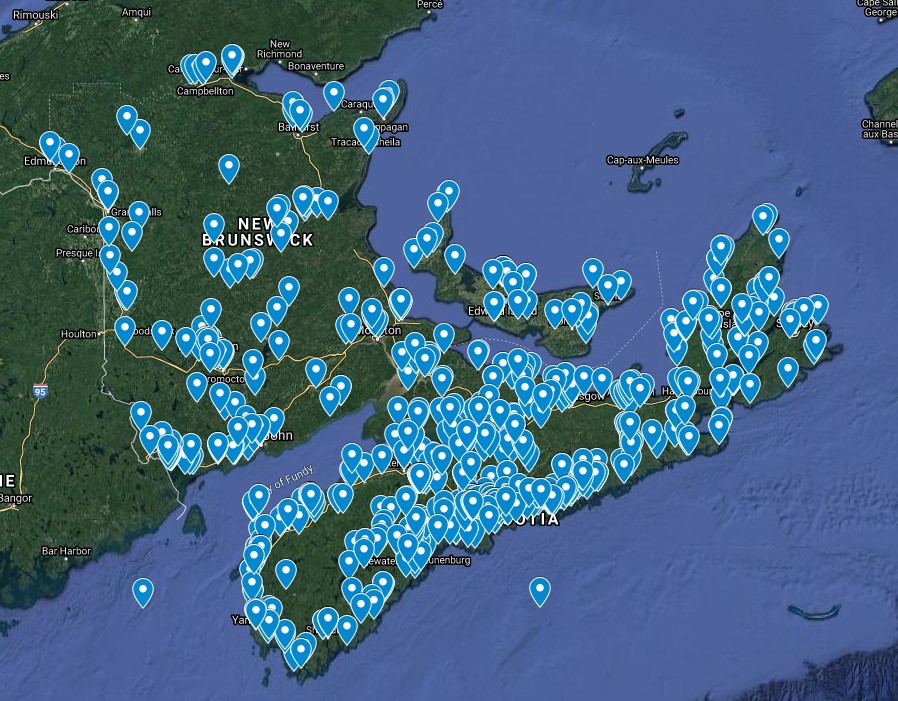 The road trip adventure begins as the family straps themselves into their seats. Dad activates their electronic tour guide, AutoWIKI, the location-aware smartphone app, and parks it in its holder on the dash, for handsfree driving and blue tooth audio through the car’s sound system. Mom turns on the ignition. It may be that this is a very organized family and they have worked out the exact route they’re going to travel, and they already know that they’re going to stop for a lobster dinner at the Rum Runner in Lunenburg. It may be that they picked Lunenburg because they know that it is an UNESCO heritage site and that Peggy’s Cove is en route. And tonight? Tonight they’re staying at the Alicion Bed and Breakfast because the girl fell in love with the dragon flies in the TripAdvisor pictures of the bathroom, and Mom pictured having a quiet sundowner on the lawn of the beautiful gardens. Dad wants to visit St. John’s Anglican Church after breakfast because he remembers the wonderful Mozart concert they attended there many years ago, just him and Mom.

Let us imagine that the family lives on Tulip Street in Dartmouth and they have decided to explore their own province during the summer of 2021 because of the restrictions on travel outside the region caused by COVID. As they aim towards the Halifax Harbour, AutoWIKI reminds them that ‘distracted driving’ is illegal and can result in a fine. ‘Hands on the wheel; eyes on the road’, AutoWIKI says in a North American female voice. The family had decided to experiment with AutoWIKI’s voices and so for the drive to Lunenburg AutoWIKI is going to be a “she”. Tomorrow they might try the Australian male voice, just for the fun of it.

As they approach the MacDonald Bridge, to cross the harbour to Halifax, AutoWIKI tells them about George’s Island and then the story about the time when the Confederate Ship, the Tallahassee, snuck out the harbour via the Narrows in Eastern Passage, after refueling and getting a new mast. AutoWIKI also tells a bit about the politics in Halifax at the time. There was a band that played Dixie to welcome the Tallahassee to Halifax, and yet, many Maritimers fought for the North during the American Civil War.

AutoWIKI’s story sparks a discussion in the car. Mom remembers last year there was a CBC story about the Tallahassee Festival at Fisherman’s Cove possibly being renamed, at the requests of the African Nova Scotian community, among others. Mom pays the bridge toll as AutoWIKI tells the family about the remarkable design of the Dartmouth Ferry terminal, which includes a geothermal cooling system that extracts and saves the cold from the winter water in the harbour, to use for cooling several buildings around Alderney Landing in the summer.

AutoWIKI interrupts the conversation and tells them about the Halifax Explosion during World War I and the amazing tidal wave that tossed boats ashore and knocked trees down flat. It also wiped out Turtle Cove, a small Mi’kmaq community on the harbour.

It is a beautiful day and the Halifax harbour islands are clearly visible to the left, and to the right, the McKay Bridge and beyond it the Bedford Basin. The sun sparkles on the water as AutoWIKI tells them about Nova Scotia Crystal, where the best-selling design is copied from the glasses that had been used on the Titanic. The Harbour Hopper, an amphibious vehicle which serves as a tour bus and boat crosses their path at a traffic light, and the kids extract a promise that they will go on a Halifax harbour cruise later in the summer.

This prompts dad to say, “I hope the Bluenose is in full sail out on Lunenburg Bay when we get there!” As they drive past the Halifax Commons, Mom and Dad talk about the music festivals that used to take place on the commons in the summers and the fun baseball games. AutoWIKI sometimes changes the subject. She interrupts and tells them about the time the G7 met in Halifax, and all the heads of state went up to the Parks Canada Citadel Hill historic site for a photo opp. The hosts had forgotten to mention the old British naval tradition of the noon day gun. A cannon gets fired from the fortress, every day at noon. It was how people in Halifax used to check whether it was time for lunch. When that gun went off that day, the secret service men grabbed President Bill Clinton and rushed off in their great black limos, thinking that it was a terrorist attack. The kids laughed and laughed. AutoWIKI just said ‘thanks for listening’.

The family takes the coastal road to Peggy’s Cove, through little fishing communities at places like East and West Dover and Shad Bay. AutoWIKI also tells them about the rail-to-trail hiking trail that links the South Shore to Halifax, how railways had played an important part in the development of the province, and the important link between the rest of the world and Eastern Canada through the container piers at Point Pleasant Park and the Bedford Basin. And many other stories, including one from one of the books of local author Joan Dawson, about the first pirate that was convicted and hanged, and who published the first newspapers in Halifax.

And then it is time to continue along the shore, towards highway 103 that will get them to Lunenburg. AutoWIKI was given a break while they were at Peggy’s Cove, but at the kids’ request, dad activates her again. “Dad,” says the boy, “AutoWIKI is telling us such interesting stuff I didn’t know. I’m curious to hear what’s going to come next!”

What does come next is a somber surprise. As they see the commemorative site for the Swiss Air crash AutoWIKI tells them about what happened. “Dad,” says the boy, “funny, we always think of plane crashes happening in other countries far away. This is awful.” Mom pauses AutoWIKI (Dad’s driving now) and they talk about that. What it must have been like to be on that plane, the dreams and plans the passengers had, the grieving families who make pilgrimages to the site. It becomes a learning moment for them all, talking about the randomness of death and the pain of grief, after hearing that story.

But AutoWIKI gets turned back on. Mom’s hoping for something to lift the mood, and indeed, they hear the story of that family who started the maple syrup business in Tantallon – a hobby the father had started to educate their kids, and now it is this fabulously successful business.

They stay on the highway to get to Lunenburg faster, but that doesn’t stop AutoWIKI from exploring slightly further afield – she sometimes finds interesting things to talk about that are 10 km away. And if she still doesn’t find anything in that radius, she’ll check the rest of the province. And so, suddenly AutoWIKI tells them about the forestry industry in Nova Scotia, and about wind power generation. Mom declares her favourite is when AutoWIKI tells about animals and birds, like the story about coyotes. The girl says no, she enjoys hearing about the science stuff, like the power output of a wind turbine and what goes into extracting gold from ore. Dad is silent for a while, and then says “you know, what I like most of all is hearing about things that I don’t normally think about. I now want to go home and read more about several things. Like what’s the difference between a pirate and a privateer. It seems that AutoWIKI has flipped my curiosity switch!” The boy says “Yea, I know what you mean. I think AutoWIKI should run a trivia contest with prizes, so I can compete with my friends who are travelling in the Cape Breton Highlands this weekend. Whoever gets the most right answers based on the area they’re travelling in wins. First prize could be….YES! To go rafting on the tidal bore in the Bay of Fundy. I wonder if AutoWIKI knows that those are the highest tides in the world?”

At supper in Lunenburg that evening they eat more lobster.